History of Nigerian Civil War With Biafra, the Cause and How it Ended The Nigerian Civil War, popularly known as the Nigeria-Biafra War which lasted from 6th July 1967 – 15th January 1970 almost destroyed the unity of Nigeria.

The Civil War was fought to reintegrate and reunify the country. It was a result of the Nigerian government’s efforts to counter the struggle by the Igbo people of the Eastern Region to break away from Nigeria under the new name – The Republic of Biafra led by a military officer and politician, late Chukwuemeka Odumegwu Ojukwu.

It is believed that the war became inevitable because the Igbo people felt they could no longer co-exist with the Northern-dominated Federal Government of Nigeria.

The Nigerian Civil War which broke out on 6 July 1967 and lasted until January 15, 1970, was the culmination of uneasy peace and instability that had plagued the Nation from independence in 1960.

It was a result of a long period of alleged political, economic, ethnic, cultural, and religious deprivations, which had its genesis in the geography, history, culture, and demography of Nigeria.

when you talk about Biafrans you are referring to the inhabitants of South-East Nigeria who are mostly the Igbos. The group pursued their desire for secession due to economic, ethnic, cultural, and religious tensions among the various people of Nigeria.

Biafra as a territory existed long before the amalgamation and independence of Nigeria as a republic but it will be said that the group fully came to the limelight on May 30, 1967, when it publicly declared her secession from the binding forces of the Federal Republic of Nigeria.

Little is known about the literal meaning of the word Biafra. But it is widely believed that the word Biafra is likely derived from the subgroup Biafra or Biafada of the Tenda ethnic group who reside primarily in Guinea-Bissau. Chukwuemeka Odumegwu Ojukwu who was then the military governor of the Eastern Region and also seen by the Igbo People as “the man in power”, was mandated by the Consultative Assembly of the Biafrans, to declare Eastern Nigeria a free sovereign and independent state by the name and title “the Republic of Biafra”.

The Republic of Biafra was mainly made up of the former Eastern region of Nigeria and was inhabited principally by the Igbo ethnic group. Biafra has been commonly divided into four main “tribes” which include: the Igbos, the Ibibio-Efiks, the Ijaws, and the Ogojas. The flag of the Republic of Biafra was created by the Biafran Government and raised on May 30, 1967. It consists of red, black, and green horizontal colours. At the middle of it, a golden sun rises over a golden bar; the sun has eleven rays, representing the eleven provinces of Biafra. The Red Pan-African color on the Biafra flag represents the blood that unites all people of Black African ancestry and shed for liberation.

The Black colour represents the black people whose existence as a nation, though not a nation-state, is affirmed by the existence of the flag.

The Green represents the abundant natural wealth of the region.

The Republic of Biafra had a different currency from that of Nigeria – the Biafran pound which went public on 28 January 1968. The Biafran government created the Bank of Biafra, accomplished under “Decree No. 3 of 1967”. The bank was administered by a governor and four directors; the first governor, who signed on banknotes, was Sylvester Ugoh.

The currency of Biafra had been the Nigerian pound until the Bank of Biafra started printing out its own notes, the Biafran pound. It is estimated that a total of £115–140 million Biafran pounds were in circulation by the end of the war.

The Genesis of Biafran Nigerian War

The immediate cause of the civil war may be identified as the coup and the counter-coup of 1966 which altered the political equation and destroyed the fragile trust existing among the major ethnic groups. Before the full-blown war, there was a military coup in 1966 (carried out by Maj. Nzeogwu which led to the death of Tafawa Belewa, among others), a counter-coup (led by Gowon, which led to the brutal murder of Aguiyi Ironsi, Fajuyi, among others) and persecution of the Igbo people living in Northern Nigeria, forcing them to return home. Even on their way home, many of them were killed in disturbing circumstances.

There have been divided opinions on the 1966 coup as some argue that corruption among the civilian ruling class pushed the military to organize the coup, while others opine that the control of oil production in the Niger Delta was also a major factor. 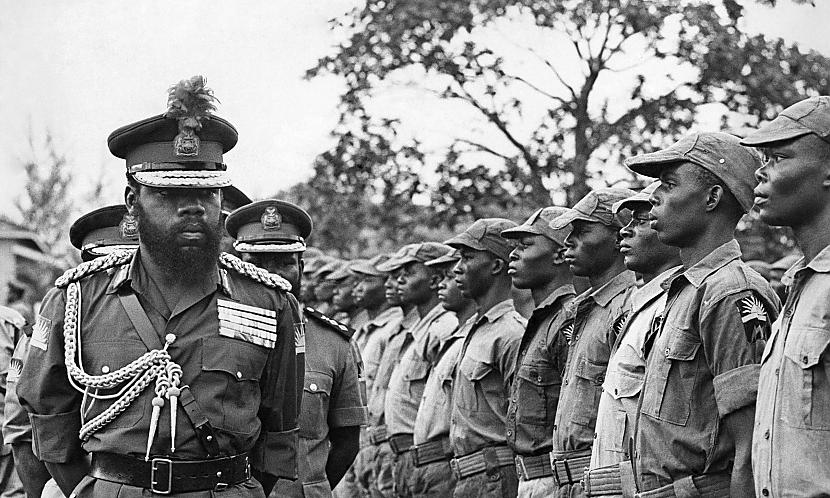 In May 1967, the Federal Military Government divided the country into twelve states from the original four regions, but the former Eastern Region under Lt. Col. Ojukwu saw the act of the creation of states by decree “without consultation” as the last straw, and declared the Region an independent state of “Biafra”.

Consequently, the Federal Military Government saw this act of secession as illegal. Several meetings were held to resolve the issue peacefully without success.  To avoid disintegration of the country, the central government was left with no choice but to forcefully bring back the region to the main fold.

As soon as the war began, the  Federal Military Government of Nigeria led by General  Yakubu Gowon surrounded the Biafra territory and captured the oil–rich coastal areas.

The blockade imposed during the war led to severe famine such that within the two and half years (30 months) the war lasted, there were over 100,000 overall military casualties, while nearly two million civilians died from starvation, which was a deliberate policy adopted by Nigeria to bring the people on the Biafra side to their knees. Western powers were also involved in the war, with Britain and the then Soviet Union backing Nigeria, while France and a few other countries supported Biafra.

How The Biafra Civil War Ended

At the orders of the Federal Military Government, the Nigerian federal troops marched in two divisions into Biafra on the 6th of July, 1976. Division 1, led by Col. Shuwa operated through the north of Biafra, while the second Division advanced on Nsukka which later fell on July 14.

On the 9th of July, the Biafrans led by Lt. Col. Banjo retaliated by marching into the mid-western region of Nigeria across the Niger River, passing through Benin City and later stopped at Ore on August 21. The Biafran troops captured the mid-west easily because there was little repulsion from soldiers guarding the region. This infuriated Gowon and he asked Col. Muhammad Murtala to form another division (Division 2) to drive the Biafrans out of mid-west and attack Biafra as well.

The mid-west region was recaptured by the Nigerian army on the 20th of September.

See Also: 10 Things You Should Know About The Nigerian Civil War

Enugu was made the capital of Biafra, and later when Enugu was captured in October 1967, Aba, Umuahia and Owerri served successively as the provisional capitals.

Within a year, the Federal Military Government captured the city of Port Harcourt and many other coastal oil facilities. The Federal Miltary Government blocked all the routes for transporting food into the Republic of Biafra which led to severe starvation.

The FMG saw this as a war strategy and a way to keep Nigeria united, while many people around the world saw this as nothing but a genocide. The food flown in by foreign mercenary pilots was very little and couldn’t solve the starvation Biafra was facing. Over 2 million Biafrans died of starvation. By the end of the year 1969, it was obvious that the war will soon come to an end. The FMG launched its final operation known as “Operation Tail-Wind” on January 7, 1970.

The operation was carried out by the 3rd Marine Commando Division and supported by the 1st and 2nd Infantry Division. Owerri was captured on the 9th of January, while Uli fell on the 11th of that same January.

Aware of the hopelessness of the situation, the self-acclaimed Biafra head of state, Lt. Col. Ojukwu fled the Republic immediately with his family on the 10th of January 1970.

The commander of the Biafran army, who was left with the administration of the Republic later surrendered to the Federal Government on the 14th of January, 1970, thus bringing the civil war and bloodshed to an end. The war officially ended on the 15th of January, 1970.

The sudden end of the war in 1970 was a big relief to both sides and the entire world was elated when General Yakubu Gowon said there was no victor, no vanquished. His government also introduced the popular three ‘Rs’, which stood for Reconciliation, Rehabilitation and Reconstruction.

At the end of the civil war, the Federal Military Government ordered that all Biafran currencies must be deposited into a bank account immediately or they would become worthless.

After everyone complied with the directive, they again ordered that every former Biafran account holder will receive only the sum of 20 pounds regardless of how much they had in their account.

This most Biafrans believed was an unjustified act of the civil war as heads of households were forced to rebuild their financial holdings as well as support a typically large African family with only 20 pounds.