Ari Fletcher Biography: Everything to Know About Moneybagg Yo’s Ex-girlfriend?

Ariana Fletcher is an entrepreneur and a social media influencer with a massive fan-following on Instagram. She is also popularly known for her relationships with rappers G Herbo and her current boyfriend, Moneybagg Yo. The 26-year-old model is also the CEO of KYCHE Extensions, a hair company she co-founded. With her huge followings on social media platforms and her lively, bubbly personality, Ari Fletcher is well on her way to becoming a massive brand.

However, the curvy model is not without the constant drama that trails her. Her relationships, which have always been all over social media, have been another reason she is always in the spotlight. Her on-and-off relationship with rapper Moneybagg Yo has been under scrutiny for a while now, as fans aren’t sure what is truly going on with the pair. Whatever be the case, the drama queen Ariana Fletcher has shown that she is one tough cookie and a force to reckon with. But how did this average girl from Chicago come to make a name for herself? Let’s look at her profile and other interesting facts below.

Ariana Was Born 26 Years Ago As An American Citizen

Ariana Fletcher was born on 12 July 1995 in Chicago, Illinois, United States. Her father’s name is unknown, though he was a high school janitor, while her mother, Erin Fletcher, worked as a waitress at a local café. Ariana mainly grew up with her mother and her two siblings, Kyle Jamison and Ashley. Her estranged father is unfortunately not part of her life.

In a Twitter post on 2 August 2019, Ariana cleared up the air about her ethnic background. She tweeted, “… I’m Creole and Puerto Rican. Case closed.” As for her nationality, she is an American, born and brought up in Chicago, Illinois, United States.

Ariana Has a Special Bond With Her Late Brother Kyle

She went on to say it was “so you can’t even speak to me without speaking about him.” Ari was just 18 years old when her brother passed away, and his death greatly affected her life. She even went on and tattooed his face on her arm and still wears the tattoo to date.

Fletcher went to Chicago Vocational High School, and after graduation, she proceeded to Northern Illinois University in Dekalb, Chicago, Illinois. However, she had to drop out of college after her brother’s death and take odd jobs to support her family. She worked as a waitress at Adrianna’s Nightclub located in Chicago, and later on, in 2015, she began her modeling career through her Instagram. This is not uncommon to beautiful young women these days who are bold and daring enough to take this path to carve out a career in modeling.

Today, Ariana Fletcher is famous as a social media personality and an entrepreneur. Her first Instagram account, @therealkylesister, was launched in 2015 when she was still G Herbo’s girlfriend. With her beautiful curvy figure and sassy personality, she slowly grew her following to 4.8 million followers. Ari’s wealth came from her brand endorsement deals and promotions on social media handles. She is an ambassador for Rihanna’s Savage x Fenty brand and has promoted other A-list brands like Fashion Nova, Waist Snatchers, and more.

Her entrepreneurial venture started in 2016 when she co-founded and launched her own hair company KYCHE Extensions. In an interview with AfroTech, Ariana revealed that she makes around $150,000 by monetizing her posts on Instagram. She also has a YouTube channel, which she opened in November 2016. The channel has over 300k subscribers and more than 6 million views. Her Twitter account has 1.6 million followers. Ari is really focused on building her million-dollar brand, and the superstar seems unstoppable in her quest for fame and fortune.

Ari Fletcher’s dating history is quite rich. Perhaps her beauty or charms have attracted her to a lot of notable men, but the 26 years old has not revealed what exactly is the reason behind her somewhat high-profiled dating history. Meet Ari Fletcher’s past love interests below and facts about her current beau.

Freeband Joey and Ariana Fletcher dated from September 2015 to June 2012. Her relationship with the rapper, which lasted for more than three years, ended after some difficulties in the relationship. But while the duo dated, they regularly shared pictures of the time they spent together on social media, which made some fans believe that the love they shared together would last forever.

Ariana Fletcher and rapper G Herbo dated from May 2015 to August 2018. Ari and G Herbo had their son in April 2018, but the pair couldn’t stay together as they broke up later in the year on the grounds of infidelity and battery. G Herbo was alleged to have cheated on Ari with Tania Williams while Ari was going through postpartum depression after the birth of their son. However, G Herbo denied the allegation, and although the two aren’t together again, they are co-parenting their son successfully.

Ari Fletcher has a son with his ex-boyfriend G Herbo. Their son, Yosohn Santana, was born in April 2018, and already the pair have broken up. They are doing a great job co-parenting their son. Rapper G Herbo is actively involved in his son’s life, and Ari does not fail to attribute the respect due to him as the father of her first son/child.

Ariana Fletcher and Gervonta Davis dated briefly after her break up with G Herbo. The two had a messy breakup that was published on social media, with Ari calling the relationship ‘a mistake.’ The pro boxer has allegedly been physical with her and had cheated on her with a stripper. 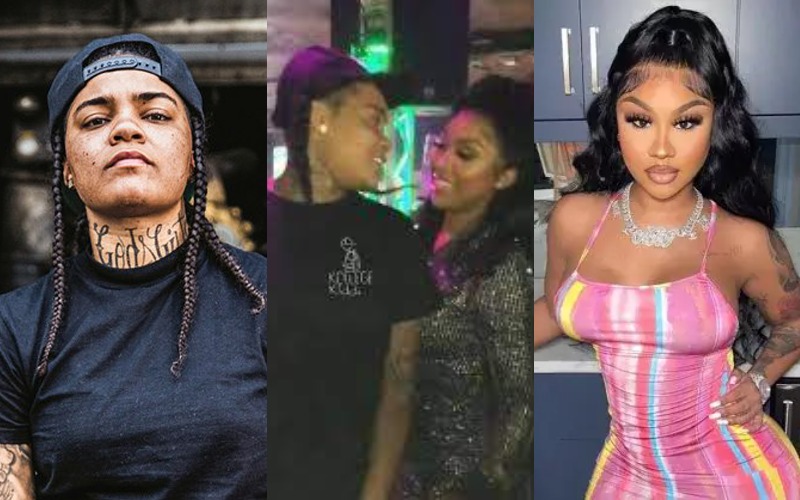 Ariana Fletcher dated rapper Young M.A briefly from September 2018 to January 2019. Their relationship started on Instagram, and the relationship was highly publicized. You should recall that Young Ma is an American rapper who is also popular as an LGBT member. So apparently, Ari was in a homosexual relationship with her at the time they were together. After her relationship ended with Young M.A, Ariana Fletcher went on to date American professional basketball player Antonio Blakeney from May to June 2019. Ari even moved down to Miami with her son when Antonio was training during his off-season in Miami. The relationship between these two is not as detailed as what is known about her other relationships, but the fact is it remains undeniable that there was something between them.

Ariana Fletcher and Moneybagg Yo have been dating since Oct 2019. Their relationship has been filled with a lot of ups and downs. However, they have managed to keep it together. Moneybagg Yo even gifted her a diamond ring once, sparking rumors that the duo was engaged. The two are known to spoil themselves with expensive gifts, like how Ari Fletcher gifted Moneybagg 28.8 acres of land for his birthday, and he once gave her a Rolls Royce Cullinan for her birthday.

In a live stream, Ari mentioned that Moneybagg had seen her when she was out shopping, although before then, they had been seeing each other around. But after she got back from the store that day, she got a call from a friend asking her to come to hang out with the rapper who happens to be around. Ari admitted that she was reluctant at first, but the two got together with time and persistence from Moneybagg. The pair started dating in 2019 but didn’t go public until 2020 when Moneybagg Yo confirmed their relationship during an interview, where he said: “We rockin’. You know what I’m sayin’? What you see is what you get…”

Their Relationship has not been Without Issues

Although the couple has sparked breakup rumors in the past by unfollowing each other on Instagram, the two appear to still be together. However, their constant drama on social media has kept fans guessing about their current status; in late 2020, the couple suddenly unfollowed each other on Instagram, giving rise to rumors of their possible breakup. By late January 2021, Ari and Moneybagg confirmed their split on social media, and Ari even accused her boyfriend of breaking her heart. But the pair got back together in February 2021, a month after announcing their breakup.

In April 2021, the couple unfollowed each other again on Instagram, inciting another rumor of a possible breakup. However, this time, Moneybagg quickly addressed the rumors and revealed that he and Ari were still very much together, saying, “we 4eva Locked In.” For his recent 30 birthday, Ari even gifted Moneybagg 28.8 acres of land, for which she was criticized and accused of ‘acting married.’ However, the buoyant IG model clapped back, saying, “Y’all don’t know the half of what he does for me mentally or financially. I’ve never felt so safe, loved, spoiled and happy with a person…”

Ariana is no stranger to scandals, be it her fights with her boyfriends, ambiguous tweets she posts on Twitter, or things she says on her live stream. She is constantly giving premium content to her fans and haters alike. In an interview with Don’t Call Me White Girl podcast, Ari talked about how she wanted her man to treat her, saying jokingly;

“Like, pull your gun out and show me like, ‘B*tch leave. I wish you would walk out the door.”

Ari received a lot of backlash for this statement, with critics saying she supports domestic violence. In response, she went on Instagram Live and said;

This, of course, didn’t endear her to the public and even elicited a comment from Apple Watts, who cautioned her saying;

“You need to humble yourself. You talk too much on the internet. And then you want to downgrade b*tches that got beat up by domestic violence.”

Currently, it appears that Ari Fletcher has disabled her initial Instagram account and has started a new IG page. It isn’t clear why she deleted her old page, though it could be linked to IG policies in terms of usage of the platform, which she might have violated. Her current Instagram account, though not a beehive of activity like her old one, can still boast of a celebrity status following. Be that as it may, Ari Fletcher seems to have been avoiding further controversies lately.