With top fashion designers like Deola Sagoe, Yomi Casuals, Kola Kuddus and other exotic fashion brands in Nigeria, one would need a lot of money to patronize their products. However, you can still look good without breaking the bank.

The fashion industry is one of the most lucrative businesses to venture into, as people constantly have a need to cover their nakedness and still look attractive.

As a way to encourage young and upcoming fashionistas, this article is focused on 15 emerging fashion designers in Nigeria. Not every tailor is a designer, vice versa, but these outstanding and uprising personalities are exceptionally good at the art of foreseeing a style and bringing it to life through high-quality fabrics.

The list was compiled by a board of fashion judges who did a comprehensive research into the world of fashion in Nigeria. Oluwatobi is the creative director and founder of T16 World of Fashion. She is a graduate of the University of Lagos, Akoka where she studied Guidance and Counselling. She began her career as a tailor but has grown over the years into a designer. She had received mentorship from the likes of Mai Atafo and Lanre Da Silva in her journey to becoming what she is today.

Her brand is an effortless, timeless and wearable line that reflects the kind of woman she is – strong, bold, fun, unique and fearless. Oluwatobi was part of fashion focus finalists at GTB Lagos Fashion and Design Week, 2014 and was also amongst the top 4 finalists at the DSTV Fashion Protégé Contest. She has showcased at Africa Fashion Week Nigeria, Lagos Fashion and Design Week. She debuted her collection SS15 early in 2015 and is obviously one brand to look out for. Ogochukwu is the creative director of Lines by Chaab, a fashion design outfit dedicated to presenting its customers with different clothing options ranging from hand embellished clothing to stunning texture play, colour play as well as pattern play in the unique art of mix and match as never seen before. Ogochukwu translates her love for languages and art into a universal language of fashion.

She emerged winner of Nigerias’ Next Top Designer Competition and later won the Music Meets Runway ‘Rising Icon Competition’ in 2014. She has also showcased at the Africa Fashion Week Nigeria and Winasbet Nigerian Student Fashion and Design Week. In 2014, Ogochukwu was rated as one of the top 12 newcomers in the industry by BlackNBold Fashion House. So far, Ogo’s works have been featured on E! Online, Africa Magic, Studio 53, Pulse Nigeria, Onobello, Bella Naija and a host of other reputable platforms. Enugu born Chidimma Barbara Akpa is an Economist from Madonna University and the CEO of CABS Couture, a Fashion Design and Tailoring Company that makes unisex clothing. Her business meets the need of having a fashion brand in Nigeria that makes ready to wear outfits with the focus on style, quality, and affordability that can be worn every day of the week.

The confident and industrious businesswoman likes to be very professional about her handwork. She believes that CABS Couture will contribute not just to the economy of the country but also create employment opportunities for individuals across Nigeria and Africa. Chidimma was a finalist on The Next Titan Entrepreneurial TV Show, where she pitched her idea on how to create employment as a designer. She is no doubt one designer to look out for. 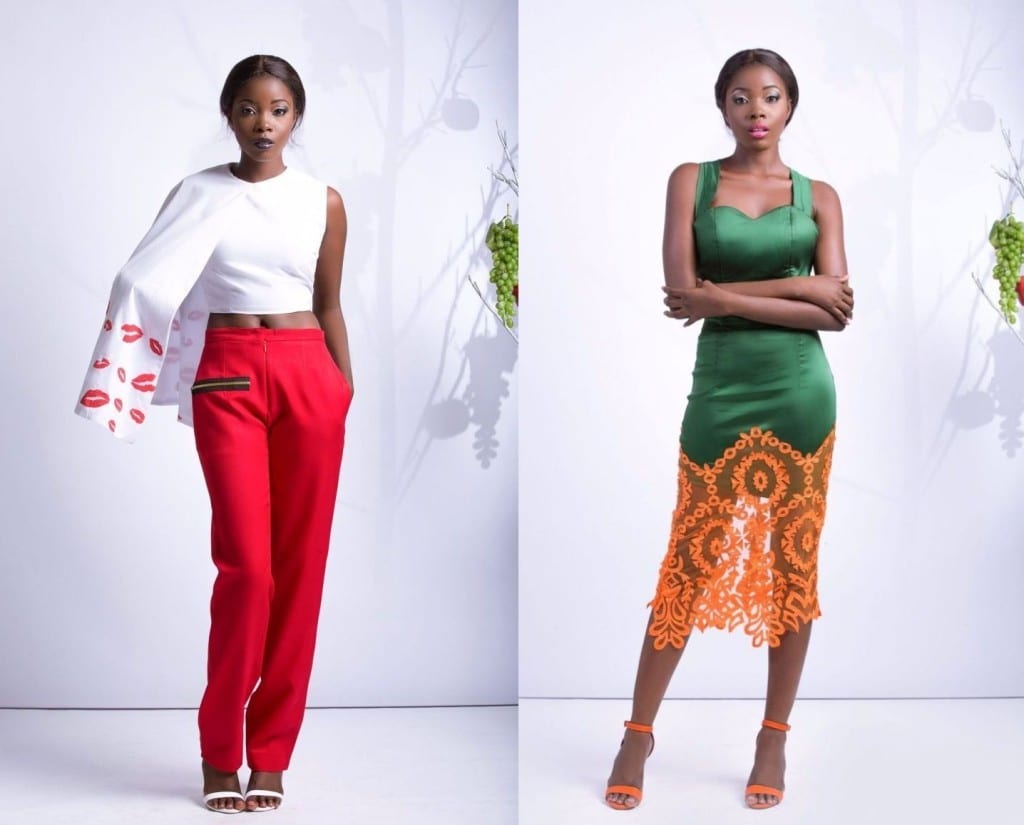 Owonifari is the founder and creative mind behind Mo’fari Couture. The 30-year-old designer studied Accounting at Olabisi Onabanjo University and is also a graduate of Lagos Business School. In 2011, Owonifari enrolled at fashion design from the prestigious Nobel Afrik, training and dress making school in Nigeria. After graduation, she was inspired to fulfil her lifelong dream to launch her brand in June 2011 while still in training.

Her participation in several competitions has made her brand grow fast. She was one of the four finalists at the 2015 Zinkata Red Carpet Challenge. Her work has been featured in several fashion blogs and TV programmes. In June 2014 she got an editorial feature in the Guardian Newspaper as the ‘Designer of the Week’. She was a nominee of the Students Union Government Awards, Best Student-Owned Organisation, September 2013 and the Oyo 30under30 Awards, Fashion Category, in December 2013. She has showcased at the Nigerian Television Fashion Show, The Dreams Come True Show With Jazzyb, Miss Heritage Competition, Ife Runway Fashion Show. In 2013, an official launch for the brand was held in April at the University of Ibadan; after which she participated in the Nigerian Student Fashion and Design Week in June, at the University of Lagos, Yaba.

In 2013, she also established the House of Dabira Campaign against Domestic Violence towards Women and Children. She recently won the Zinkata Red Carpet Challenge, for which she got to dress Dakore Egbuson-Akande for the 2015 Africa Magic Viewers’ Choice Awards. Dakore made the best-dressed list of sites such as bellanaija, stylevitae, among many others. Bimbo Oye-Akinnifesi is the creative director of Reni Smiths. She grew up in Lagos with her grandmother who was a seamstress, and from there she first built her love for the world of fashion and designing.

She had a formal training at Instituto di Moda Burgo where she got a diploma in fashion styling, then she entered the world of fashion by establishing the Reni Smith brand which she launched at the 2013 edition of GTB Lagos Fashion & Design Week as one of the top 10 young designers showcasing the Bella Donna collection. Omoko graduated from the Department of Textile art at Delta State University in 2014 after which she pursued training at OSC College of Fashion. Her brand originated from her passion for making clothes that interprets aesthetics and speaks class. Her major breakthrough was when she emerged as the most creative designer at the Winasbet Nigerian Student Fashion and Design Week in 2014 which featured over 40 young designers from various states in Nigeria.

This prize brought her to the limelight as she was featured in various media platforms in Nigeria. A few months later, she went ahead to win the David Wej Half a Million Naira Fashion Competition. She also won the BlackNBold Fashion Awards for Young Designer of the Year. She is presently an in-house stylist and wardrobe designer for Cool TV and Wazobia TV and has styled various celebrities in Nigeria. Derbs Signature is a fast growing fashion brand owned by Nigeria-UK trained engineer, Adebola. The young lady has always loved fashion with an insistent quest to fill the gap and make a better image and personal brand. She showcased her collections at 2011, 2012 and 2013 editions of the Bristol Fashion Week in England. She was also one of the four finalists of the Zinkata Red Carpet Challenge. Her works have been featured in notable magazines in the UK and Nigeria. In 2015, she released a full collection Chic bohemian and she will also be showcasing at some major fashion events in Nigeria this year. Nkechi has been quite crafty with the needles since her young age, she used to make clothes for her doll using crochet stitches. She enrolled into a vocational and skills acquisition centre; Youth Resource Center-Idia Renaissance in Benin, Edo state, where she learnt the basics of fashion designing for six months and emerged as one of the top students of the department. The graduate of the University Of Benin is into bespoke and made-to-measure of the day-to-day occasion and bridal wears, offering a one on one service, and working closely with clients to create their ultimate dream outfits, ensuring the perfect fit to suit individual tastes. Designs by 7.09 Couture have been on several red carpet events. Owned by the graduate of English Language from the University of Ado-Ekiti, Modupe, the label has the capacity to be a universal brand. Modupe has been featured on a few television programmes, fashion magazines, and blogs. She was listed under the Top 12 fashion industry newcomers in the year 2014 with her brand in the Top 10. She was also one of the finalists that made it to the Game On house for team fashion, The reality TV show sponsored by Malta Guinness, which has been a huge breakout for the brand. Gbenga Luke- Adetule is the Creative Director of NVO APPAREL, a proudly Nigerian fashion brand that offers premium bespoke outfits. NVO stands for NAIJA’S VERY OWN. In June 2014, Gbenga showcased at the second edition of Winasbet Nigerian Student Fashion and Design Week (NSFDW), the biggest student fashion week in Africa, and this was a turning point for him, it motivated him to dream bigger and work harder, just after this showcase, he was invited to audition for a fashion project called “The Making”, a lot of experience was gained as he learned from the likes of Mai Atafo. OZA COUTURE was created by Adepeju Okunuga in 2012. The young Babcock University graduate was one of most established and successful fashion designers on campus when her brand came into limelight in her 300 level. Oza Couture is all about designing unique, stylish, classy, decent and well-tailored dresses for women. Her environment in school inspired her to be able to design dresses that would still look decent and also compliant with the school rules. She showcased her first collection “The Nightingale Collection” in the early parts of 2014 in different fashion shows organised in her school. Breaking into the fashion scene late 2013, Awe clothing’s has been a student’s brand with distinction as they have achieved so much within the little time of establishment with roots in the United States and across campuses in Nigeria. The brand is owned by three young designers, Apooyin Abiola a student of the University of Lagos, Yusuf Olusola a student of the Federal Polytechnic Ilaro and Doyin Junaid who resides in the United States. These young protégés have been able to work together as a team and channel all their creative energy into the Awe brand.

In the year 2014, Awe clothing’s was nominated as the Emerging Brand Of The Year at FUNAAB Awards, Student Enterprise of the Year at the UNILAG Awards and also at the Tush All Youth Awards.  Awe has styled Celebrities like BOJ, Tosyn Bucknor, Cynthia Morgan, Vector, Kiss Daniels, Toke of UNILAG FM amongst others. Paschal is an undergraduate student at Babcock University and creative director of Royal Couture. He is a proficient designer who makes strictly male outfits. He officially launched his designer flagship store; ROYAL COUTURE in 2015. And also debuted the ‘Urban Soldiers’ at the Babcock University Uninfluenced Fashion Show, a western university fashion clique which also featured prominent and talented fashion designers from within and outside the country.

Read Also: For Ladies: 10 Things You Need To Know When Buying A Wig Oluwafolakemi Aigbirior is a fashion designer with the taste for style, finishing, and fit, she loves paying attention to details. Her love for arts and crafts is borne out of the desire for designing and making people look good. The graduate of Home Economics at Obafemi Awolowo University and creative director of Fowal Flair started her brand during her undergraduate days and was incorporated in 2011. Aigbirior is an expert in creating bespoke and ready to wear creations.

This rising brand is also into designing and production of timeless designs for women. Over the years, Fowal Flair has been able to train a good number of young females by helping them bring out their potential creative abilities. She is also a Goldman Sachs’ 10,000 Women scholar of the Enterprise Development Centre (EDC) at the Pan Atlantic University.